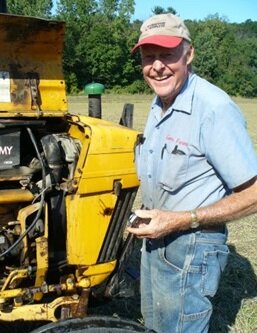 George Edward Mesick, Jr., 94, of South Schodack, New York, passed away peacefully in his sleep on the morning of July 11, 2022.

Born to George Edward Mesick, Sr. and Beatrice (Oakley) on August 27, 1927, George was enthralled with farming from a young age. As a child, he saw his first bison on a trip out west with family. He never forgot that experience.

In 1945, George graduated Castleton Union School. In 1948, he graduated from the Cornell University with a degree in Agriculture. Two years later, in 1950, he married fellow Cornell alum and high school sweetheart, Geraldine (Gerry) Hanks. Together, they raised five children and expanded the farm to the 450 acres it is today. In 1973, George realized his childhood dream and he and Gerry purchased their first three bison and GEM Farms Buffalo was born.

In addition to farming life, George was an active and beloved member of his community. He led a local 4-H group, served on the Schodack Central District School Board for over 25 years, and was a charter member and later fire commissioner of the South Schodack Fire Company for 40 years. He was also a past master at Sunnyside Lodge 731 in Castleton. He and Gerry were active members and directors in many dairy and bison associations at regional and national levels. Thanks to their time on these various boards and trips with their children, George and Gerry were grateful to have traveled to every state in the union.

Throughout his life, George worked passionately to continue the Mesick legacy with his sons and grandson, the ninth and tenth generations to farm the same land in Schodack. He is remembered for his work ethic, his good nature, and easy smile. George was a friend to anyone he met and left a lasting impression. He loved farming, and enjoyed spending his time preparing the fields, planting and harvesting the crops, repairing equipment, and building in his workshop. He could always be found working on a project and he was happiest when he could share those projects with others. Many may remember George and Gerry for the farm corn stand. Every summer for over 50 years, GEM Farms has been locally famous for the best sweet corn around. George and Gerry were always willing to stop and chat with customers for a few minutes about the farm or the buffalo.

In recent years, George spent more time woodworking, a craft he learned from his grandfather as a young boy. He has thoughtfully crafted wooden crates, picture frames, and boot jacks, amongst other items, as gifts for his family. He used lumber milled from trees and reclaimed barn wood from the farm. These are treasured heirlooms in the Mesick family that are not only beautiful but functional, as George, ever the farmer, was endlessly practical. It was very important to George that his gifts were useful.

On August 27th, 2022, what would have been George’s 95th birthday, his family will hold a Celebration of Life at 11am in the buffalo field which he loved. Family and friends are invited to attend. The field is set back on Van Hoesen Road, across from the main farm, and can be accessed by a dirt road east of the railroad bridge.

The family asks that in lieu of flowers, please consider a donation to the Equipment Fund for the South Schodack Fire Company (1567 Bame Road, Castleton, NY 12033), which was a cause near and dear to George’s heart.

Share Your Memory of
George
Upload Your Memory View All Memories
Be the first to upload a memory!
Share A Memory
Plant a Tree