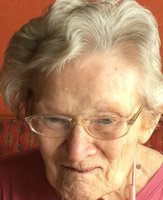 Josephine A. Lounsbury passed away on July 10, 2021. She was born in Hudson NY and lived in Newton Hook NY until she married her husband, Philip (Wes) Lounsbury and became a long-term resident of Castleton, NY. Josephine was born on February 23, 1927. Jo was predeceased by her husband of 68 years, her son Philip, parents Paul and Anna Szafran, brothers Edward and Paul Szafran, and sisters Mary Jewett and Dolores Howe. As a young adult, she worked for the Fort Orange Paper Company and later at the Hamilton Printing Company in Castleton, NY retiring from there at 65. Jo enjoyed boating and, both she and Wes were longstanding members of the Castleton Boat Club. She loved dogs and owned several (Ginger, Genesee and Crystal) throughout her life. Jo also enjoyed taking off in the fifth wheel she and her husband owned, generally travelling to Lake Champlain campgrounds. She also loved attending events at the Melvin Roads Post and motorcycling which she did with her husband well into her 70s. Jo leaves behind several adoring nieces and nephews. There will be no calling hours. Services will be private. In lieu of flowers, contributions may be sent to the American Cancer Society.