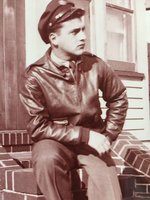 December 23, 2019 Rensselaer County Run Thursday 12/26/19 and Friday 12/27/19 with photo Ercolano, Domenick Castleton-on-Hudson, NY-Domenick Ercolano, World War II Veteran and Pro-Life Advocate, 94, passed into the arms of Our Savior on Saturday December 21, 2019, following an illness. He was born in Brooklyn, New York on February 21, 1925, to Aniello and Silvia (Angora) Ercolano, immigrants from Torre del Greco in Italy, a small city near Naples. Domenick was always very proud of his Italian-Catholic heritage; he also inherited an ardent and lifelong patriotism for America. He was educated at Manhattan High School of Aviation Trades. In June of 1943, he was drafted into the U.S. Army Air Corps., the forerunner of today’s U.S. Air Force. He trained at facilities in Great Bend, Nebraska; Rochester, New York; and Salinas, Kansas. Domenick never realized his dream of becoming a pilot but served as a Remote Control Turret Machine Gunner, or Top Gun, for the 435th Bomb Squad aboard a B-29, known as “The Superfortress.” He served in the South Pacific from 1945-1946, including assignments to Kwajalein, Guam, Tinian and Okinawa. He earned the rank of Staff Sergeant and was discharged in March of 1946. On September 5, 1949, Domenick married his childhood sweetheart, Antoinette “Anne” Recce, at St. Thomas Aquinas Church in Brooklyn. Anne was a World War II veteran in her own right, volunteering for the U.S. Naval Reserve (Women's Reserve), better known as the WAVES, from 1944 to 1946. The Ercolano’s lived in Brooklyn and Queens before settling into their family home in Nesconset on Long Island in 1968, where they spent the next 50 years. Domenick had a successful career in sales for more than 65 years with companies that included A&P, Hostess Cakes and Drake’s Cakes. Later in life, Domenick was a vocal and tireless advocate for the pro-life movement, working to save the lives of preborn babies in our communities and in our nation. He was also a strong proponent of the Boy Scouts of America and was a sought-after guest speaker for Eagle Courts of Honor in many communities on Long Island. He was known for delivering a very moving speech to the new Eagle Scouts, exhorting them to be steadfast leaders and to bring their scouting values into the public arena for the service of others and for the good of America. His speech culminated in his singing “God Bless America,” leading everyone in an emotional homage to the “land that he loved” so much. Domenick was a member of the Sgt. John W. Cook Veterans of Foreign Wars Post #395 in St. James, New York for many years, serving as Commander, Quartermaster and Chaplain. To benefit needy veterans, Domenick raised record-breaking funds through the VFW’s Buddy Poppy program, earning national recognition for his efforts. At the time of his death, he served as Chaplain for the Peter Andrews Memorial VFW Post #7337 in Castleton, New York. Domenick was a Fourth Degree Knight in the Knights of Columbus. Domenick is survived by his three daughters: Donna Ercolano (Sr. Maria of the Holy Face of Jesus & the Immaculate Heart of Mary, OCD) of Rochester, NY; Debra (William T. Brennan) of East Schodack, NY; and Doreen (Stephen H. Truesdell) of Castleton, NY; seven grandchildren and two great-grandchildren. He is also survived by a brother, Jerry Ercolano, of Naperville, IL. He was predeceased by his wife, Antoinette; a brother, Joseph Ercolano; and a beloved sister, Connie (Ercolano) Polo. Calling hours are on Friday, December 27, 2019 from 4 to 7 pm at Ray Funeral Home, 59 Seaman Avenue, Castleton, NY 12033. A Mass of Christian Burial will be celebrated 10 am Saturday, December 28, 2019 at St. Mary’s Church, 10 Lodge Street, Albany, NY 12207, followed by interment at New Sacred Heart Cemetery in Castleton. In lieu of flowers, donations may be made in his name to the Eternal World Television Network (EWTN), 5817 Old Leeds Road, Irondale, AL 35210. Ray Funeral Service, Inc. 59 Seaman Ave. Castleton, NY 12033 (518)732-7663